No matter what cabin class, traveling internationally with a baby can be a daunting task.

Relatively speaking, we got extremely lucky with ANA Boeing 777-300ER First Class. Chloe (our socialite/influencer) slept peacefully for most of the flight. When she was conscious, she was so playful too ❤

The Korean A380 First Class on the other hand…. her inner monster came out. You can see it in her eyes…

And finally let’s go upstairs for this Thai A380 First Class & find out together how she fares for this flight. Spoilers, it’s the latter 😦

Unlike the previous Thai 747 First Class, this plane is much bigger and newer. Their “Royal First” cabin consists of 12 seats on the Upper Deck in 1-2-1 configuration. On this aircraft, the best seat is 2K since it has optimal windows & legroom.

The second best seat is 1K. It has the most legroom in the entire plane! Nevertheless, it’s missing a third window at the very front. Since Paul heavily prioritizes legroom over window view, he opts for this seat despite its flaw.

Tip: so if having more windows is very important to you, I would recommend you not getting this seat…

And here’s what the middle seats look like from Seat 2K perspective.

For Chloe… no matter the airline, the best first class seat is on mommy’s lap.

A hot refreshing towel was given to each passenger before take-off, which we appreciated. More notably though, a complimentary Rimowa Amenity Kit was presented for everyone. One of my favorite mini-cases in the sky 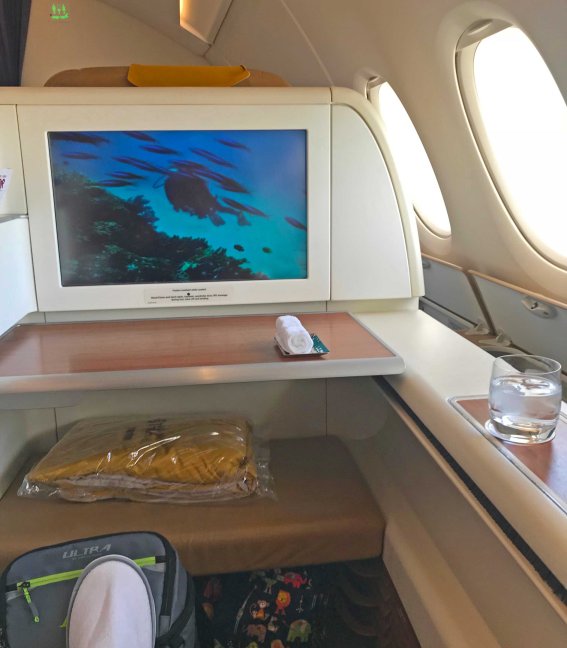 After take-off, we glance over the menu to look at the meal offerings. The three main choices are Thai, Western, and/or Japanese Cuisine.

Chloe chooses neither and opts for milk instead. Both Miki & Paul weren’t too hungry, so they held off on the meals to focus on taking care of the baby first.

Afterwards, the flight attendant staff kindly makes the bed for Chloe. Like ANA, this type of proactive gesture goes a long way especially when traveling with an infant child.

Unfortunately, Chloe got a little bit picky and did not like the bed. Instead, she preferred to go nighty-night on daddy for a long…. lonnnng…. time — making Paul immobile for most of the flight.

During Chloe’s sleep, Miki had the opportunity to order some appetizer spread to nibble on. 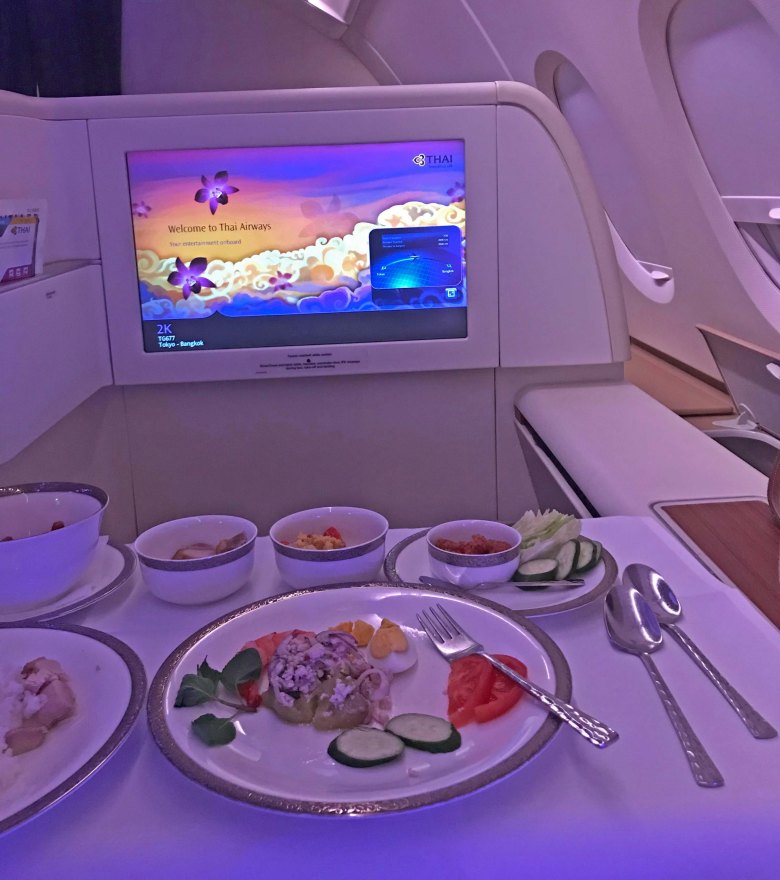 Hours (sleeping on daddy) later, our socialite/influencer wakes up with Thai’s royal orchid flower by her side… she was an angel for the rest of the flight 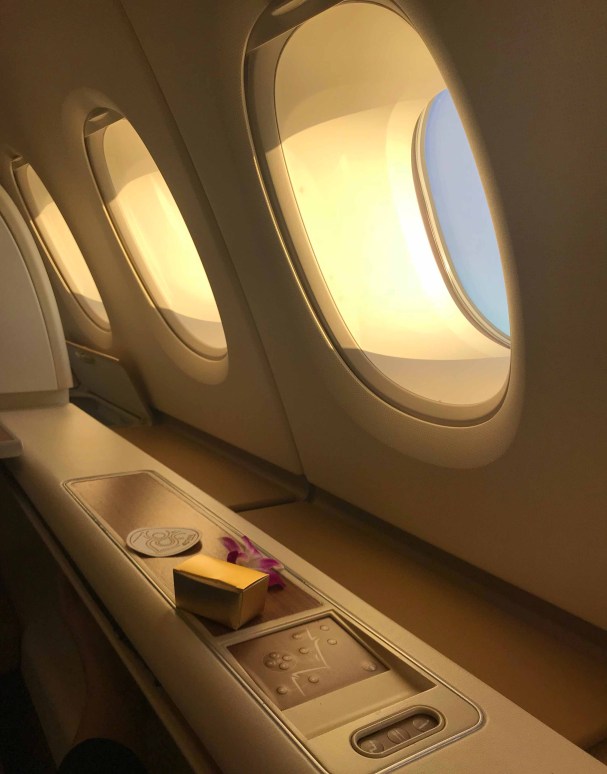 Normally, the flight review for most airlines end here, but Thai Airways takes their “Arrival Service”…

Upon landing in Bangkok International Airport, a Thai Airways staff waits in front & greets us as we deplane the aircraft. Immediately, we get on her personal golf cart and zoom across everyone to get through customs. It was incredibly convenient.

Through a secret (not in picture) security customs line, it took literally 5 minutes from plane to baggage claim.

On top of that, multiple staffs were assisting each First Class passenger throughout the whole process. One would be your personal traveler assistant & the other would carry all your luggage.

It was mind-blowing to experience and witness.

We’re no kings and queens, but we certainly felt like royalty 🙂

If THAT wasn’t enough, they not only assist getting your luggage from the baggage claim… they also escort you out of security and help you put the luggages in your car.

Let me repeat that for emphasize,

Overall, I’m in love with Thai Airways A380 First Class. This was completely a different experience than the ones we had before with this airline. Despite Chloe making Miki & Paul a little busy during the flight, we all still had an awesome time. This was mostly thanks to the staff & crew being very understanding, who went above & beyond in trying to make our journey as luxurious as possible.

On top of that, their “Arrival Service” is seriously unmatched.

I mean, what airline